The first annual global conference of the Internal Audit departments was an event which the almost 60 auditors, participating from 10 countries spread all over the world, will never forget! Besides discovering talents, many of them did not realize they would have, they also made a real difference to the lives of 50 mentally disabled children and the staff of the Val Fleury nursery near the Coatings operations in Montataire. The Val Fleury Association operates in the Val d’Oise region of France and is committed to support children aged 3-20 years with multiple disabilities. It was founded in 1968 and is fully dependent on gifts and sponsoring.

Inspired by a Let's Colour initiative in China, as well as several community team building activities in Arnhem, the Auditing Team decided to make a team effort while contributing to a good cause in the community where their conference was planned to take place. They contacted the Community Program Staff who provided some ideas and suggested to have our colleagues from Decorative Paints in Montataire make a fitting proposal for their community. As one of them already was in touch with the Val Fleury nursery they decided to contact them to investigate their needs. Besides painting, the organizers also expressed their wish to contribute something directly affecting the children.

The major joint effort began with intensive and detailed preparation by our Dutch and French colleagues. It was quite a challenge as they did not know what to expect and also if the conference participants as well as the French Deco colleagues would be ready to volunteer. The objective of the event was to add color to the lives of the children and give support to the dedicated Val Fleury staff. The final plan was quite ambitious as next to the painting of walls in different areas, also colorful murals, designed by expert artists, had to be applied. In order to actually meet and interact with the children the volunteers would entertain them by transforming into clowns, balloon sculptors and singers.

To the surprise of the organizers the Conference participants showed great enthusiasm to do something different than auditing. Before the actual event took place, groups from the different regions started to practice ‘at home’ to make sculptures out of balloons and looked for songs to sing and find costumes for the clowns as well the required puppets for their show. Fully motivated, on March 5 they anxiously gathered at the Val Fleury nursery and surprised each other by demonstrating a great variety of talents driven by enormous energy. With professional support from their Deco colleagues they consciously painted the walls as a US auditor said: "I worked on a team with fellow auditors from the Netherlands, France and China to paint a hallway. Being auditors, we were very methodical, painting one wall at a time and going back over our work to ensure it was properly completed. We worked well as a team, holding and passing paint and brushes to one another, stabilizing ladders, and guarding the hallway door to keep the painter from being knocked off the ladder."

Others were involved in entertaining the children as clowns, while singing songs in their own languages and perform puppet shows. For the French participants it was the first, but - based on their reactions – certainly not the last time, that they participated in a community event: "We all had different roles and agreed it was an unforgettable day, full of happiness and emotions, especially for the ones who shared intense moments with the children. The best reward was to see all the children smile and having brought colors not only to their home and but also into their hearts."

A Dutch volunteer was impressed by the team spirit among all participants from the various cultural backgrounds: "It was great to see everybody making use of their individual strengths and how a plan comes together. It was even better to see reactions from the children and the gratitude from the staff. We made the difference that day and even though I was exhausted but proud I took part in it."

The Asian Internal Audit Team from Shanghai thoroughly enjoyed the opportunity to be involved in various activities:"We realized how some people are much less fortunate than us and also how selfless the people are who care for these children on a daily basis. This inspired us a lot to think and act more about the people around us and we are very keen to be involved in more community events in the future."

Their Singapore colleagues were proud to be part of AkzoNobel and to be actively involved:"We were notified that the children might not react or be very involved due to their handicap to avoid our disappointment. Despite previous warning, the room was filled with laughter and the children were clapping. That was when we realized our patience paid off and it was definitely a bonus to our effort."

Last but not least, the proud initiator and organizer from the Netherlands, Thon de Block:
"We made it! Thanks to my colleagues from Internal Audit and Decorative Paint. When I started this journey, I got inspired by the warm and colorful stories from Decorative Paints but also by the different successful projects in the AkzoNobel Community Program. We as Internal Audit could not sit back. We have the talents and all the colors as well. By running a community project, we brought people with different backgrounds together and showed that we are a very colorful and successful team. It made us more aware of our role outside the offices: Make sure that your color will add value to people’s lives." 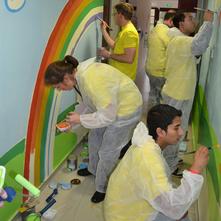