Music and paint have something in common: both bring color to people's lives! Our colleagues from Decorative Paints in Casablanca, Morocco must have had this thought in mind when they decided to help restore a public music conservatory located in the Derb Sultan district, a very busy area which is often called the second heart of Casablanca. Not long after the corresponding request from 'Sourire d'Espoire' (smile of hope), an active organization inter mediating requests for support and financial donations, reached our colleagues they paid a visit to the conservatory.

They were shocked to see the bad state it was in; the outside as well as the interior walls were heavily damaged, glass was broken, office equipment was out of work and the garden had been seriously neglected. No wonder that no educational activities had taken place for a long time. The purpose of the conservatory - to serve as a source of inspiration for the local population by being a place where educated and uneducated youngsters can interact for a common purpose, absorbing the musical legacy of their ancestors – had become out of reach.

In close collaboration with the 'Sourire d'Espoire' association, the 'Conservatoire Derb Sultan' directors and our volunteering employees, an ambitious project was designed and divided into 5 related segments: the painting of the building, the renovation of the garden, the purchase of new multimedia equipment like desktops, a retro projector and TV, masonry work inside the building and last but certainly not least running an awareness campaign about the music academy for children. Support from the Community Program was granted and 30 volunteering employees started with the preparations. The project was divided in three time slots totaling 15 days in which four different groups had to perform the carefully prepared activities. The regular volunteers from 'Sourire d’Espoire' were impressed with the plans and decided to participate in the various activities.

Group 1 took care of the painting program. Assisted by one of their own professional painters they painted 4 different sections of the building. Group 2 was responsible for the recruitment of new candidates. With the help of several music teachers they delivered basic tutorial presentations at 3 major nearby elementary schools and invited the students to visit the conservatory. Apart from an introduction to the arts of singing and several musical instruments the students could participate in various workshops themselves. Bouchra Bouanani, who coordinated the project explained: ‘with this action we hoped to reach as many students as possible and give them a good taste of musical education.’ Group 3 took care of the space arrangement and in fact reorganized the building internally. Group 4 took care of refreshing the garden by giving it a new fresh look.

The school management was extremely pleased with the colorful results. Especially the visits to the conservatory created a lot of interest and happiness for the children. Some conservatory students thanked the AkzoNobel volunteers by giving a singing performance. This gesture clearly confirmed that the main objectives of the project have been achieved, namely improving and strengthening the sense of community while educating the children about arts. The conservatory again serves as an architectural and musical legacy in the city of Casablanca: it’s like music to our ears! 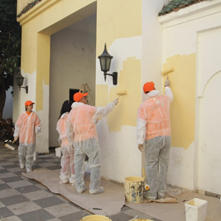