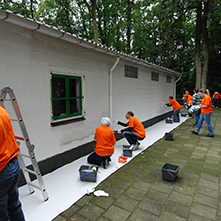 Scouting Luctor et Emergo in Arnhem is a scouting group especially for young people with mental or physical disabilities. With their facilities in serious need of maintenance and renovation, the scouts' plight was brought to the volunteers’ attention by De Arnhemse Uitdaging, an organization that matches companies with local good causes.

"As close neighbors of the scouts we wanted to support them. Our colleagues like to work with their hands, and many hands make light work," said one of the project coordinators, Rob Sanders. "It's fun to be active for a good cause and nice to see each other’s talents outside of the office."

The team was especially grateful to Deco Sikkens Technical Advisor Theo Janssen, who played an important role. He visited Luctor et Emergo before the work was carried out so that he could offer the very best advice on which paints should be used and how best to apply them to ensure the results were as good as they could possibly be.

The Community Program’s support bought paint and tools from the Sikkens center in Arnhem, who also devised a painting and color plan. The work included painting the exterior of the building, which took half a day, as well as cleaning walls, the premises and garden, and carrying out some repair work.

The group additionally agreed to donate some wooden outdoor benches. "Afterwards, the building looked like new," said Erny Baars, another of the project coordinators. "It's rewarding to support an organization with limited resources, and being active for the community with AkzoNobel products is a great example of 'Winning Together'."

It was a challenge to get all 35 volunteers together at the same time to carry out the project during a very busy time of year – especially for those colleagues involved in implementing new HR systems – but all agreed their efforts were worthwhile. One volunteer said: "It was great to see how the building turned from grimy to a showpiece in just half a day – it's amazing how much work can be done in just four hours by so many people!

I didn't know some of my colleagues were such good painters, and it was good to help Luctor et Emergo by completing some work that would take them months to achieve by themselves." Another added: "In the office we don't sweat but I did here, moving so many bricks!

The rainy weather didn't discourage us from working at all, not until the last brush stroke was made. The garden is much safer now as we also restored the fence, and we all received a chocolate medal from the scout manager."