A spectacular circus gala entitled ‘Henry’s Childrens circus Hallöchen’ was the end result of many months of intensive practice by about 160 children from the Bensheim region as well as many volunteers. One of the employees from Powder Coatings in Bensheim was closely involved by sewing the colorful costumes and other kinds of preparatory activities. With support from the Community Program the materials for the costumes, the arena and other equipment could be purchased.

The preparations for the project week at the Kappesgärten elementary school in Bensheim already started in October 2009. Finally on May 7 the many volunteers that helped realize the circus performance could enjoy their massive joint efforts that was given the credo ’Great results together’: a spectacular circus gala performance was presented by the children.

About 160 children from the western part in Bensheim as well as from the newly built Kappesgärten attended the rehearsals at the school. Every child, without exception, presented an act. Several groups were formed consisting of up to 15 children who, depending on the difficulty rating of the acts, rehearsed in different categories. A large range of circus acts was covered with acrobats, jongleurs, clowns, one wheel cyclists, etc. Every group had chosen its own artists name, like in the acrobats there were three: ‘the super acrobats’, ‘the strong pyramid team’ and ‘the Artisto-Kids’. The children painted their own T-shirts, prepared the posters and entry tickets for the gala performance. Also banners were created and the clowns’ make-up was created by the children as well. And then there was of course the 1.5 hours daily training of the acts.

The creative input of the children turned the Weststadthalle in Bensheim into a wonderful, colorful magic place. The cheerful painted faces of the children, the costumes, the music and the special effects, the arena with all the decorations and above all the enthusiastic applauding public will be in the memories of all who attended: the children, the volunteers, the parents and the other 800 visitors.

The show lasted about 4 hours with an intermission of about 45 minutes. From all the reactions it was clear that the public will certainly come back if there were to be another performance next year. And the children? They had a lot of fun and who knows what talents they have discovered thanks to the support of the many volunteers and the Community Program! 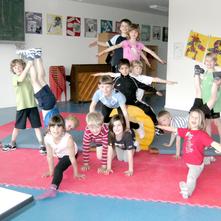