year operating income increased 59 percent to €1,573 million (excluding incidentals up 36 percent at €1,462 million), as a result of process optimization, lower costs, reduced restructuring expenses, favorable currency developments and incidental items. The company was recognized as a leader in the field of sustainability by the Dow Jones Sustainability Index (the Materials industry group) for the fourth year in a row.

Looking ahead, we expect 2016 to be a challenging year and anticipate limited support from the markets in which we operate. We will continue to build on our foundation of operational excellence, adding organic growth and innovation to the next phase of our strategy, creating everyday essentials to make lives more liveable and inspiring."

Decorative Paints: Full-year operating income increased by 39 percent as a result of the new operating model, lower costs, reduced restructuring expenses and currency developments. Revenue was up 3 percent due to favorable currencies offsetting adverse price/mix and volumes. Volumes were down 1 percent overall for the full-year, with positive developments in Asia offset by Latin America and Europe.

Performance Coatings: Full-year operating income was up 45 percent, due to performance improvement initiatives, management delayering, lower costs, reduced restructuring expenses and currencies. Revenue was up 7 percent, driven by favorable price/mix and currencies offsetting lower volumes. Volumes were down 2 percent across the segments, impacted by lower demand in Brazil and ongoing spending declines in the global oil and gas industry. 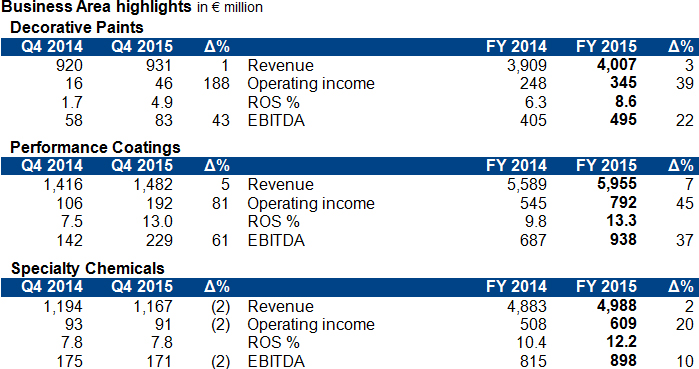 Outlook
We expect 2016 to be a challenging year. Difficult market conditions continue in Brazil, China and Russia. No significant improvement is anticipated in Europe, particularly in the Buildings and Infrastructure segment. Deflationary pressures continue and currency tailwinds are moderating.

information on our financial guidance for 2016-2018 can be found on www.akzonobel.com.